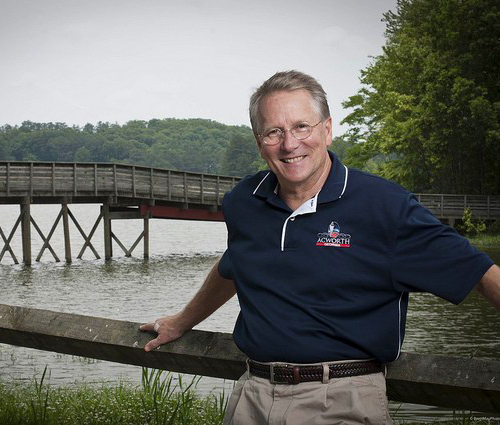 Tommy Allegood likes to say that he’s never really had a career, but “a series of adventures.” Two decades ago, one of those adventures led him to Acworth, and before he knew it, he and his wife Carol were renovating their beautiful, century-old Victorian farmhouse in their brand-new hometown. Not being one to say no to a good adventure, Tommy found himself signing up to run for City Council in 1999. The rest, as they say, is history.

Nearly twenty years later, the mayor’s office in Acworth’s City Hall is peppered with framed awards and plaques, photos of Tommy’s kids and grandkids, a red superhero cape he once wore to deliver a State of the City address (as “SuperMayor”), and a crystal ball, which he says represents all the good things that lay ahead for the city. We sat down with Mayor Allegood in his office to talk about what makes Acworth so special, how he became part of the community, and what his proudest moments have been along the way:

How did you wind up in Acworth?
I was finishing up an adventure in south Florida, and a former business associate in Acworth asked me to come up here and help him with something. I came up here from Melbourne Beach for the weekend. I’d never been to Acworth; I’d grown up in another part of the county, but this particular city, I just knew it because it was a place on the map — I didn’t know anything about it. That weekend, I found this old historic home that was being foreclosed on. I, being the adventurer, went back to tell Carol and said, “Let’s go back next weekend and look at this house.” It looked like something the Munsters ought to be living in; it was in terrible shape. But she was up for it, we bought the old house, and we moved here in 1997. That was the impetus.

What was your first impression of the city?
There was a quaintness about the town; at the time, there were few businesses here. The first person I met was Abbie Parks, and they were having a dog show out on Main Street. So, we decided to buy this house, and I could see this unique possibility. I thought it was positioned in a really unique place.

How did you first get involved with local government?
I wasn’t even thinking about getting involved in city government. But I realized quickly, as I was trying to get the city to help me with some zoning things, that the city was not cooperative. I came home one afternoon and said “Carol, you know, we might’ve made a mistake.” And she said, “Well, you’re the one who’s always saying to become part of the solution. There’s an election cycle right now. Why don’t you run for city council?”

So, I came down to City Hall and said, “OK, I’m going to sign up to run for City Council.” I won that election, and that’s what started it. I didn’t think I’d ever be involved with politics, but I knew that if our property, our investment was ever going to have any value, this town was going to have to come back to life. That’s where the journey began.

How would you describe what makes Acworth special?
I’d say it really boils down to having an extraordinary quality of life. We’re all looking for something different, but we all want quality of life, and we’ve been very successful, and very intentional about building that here. We’ve invented programs that are inclusive for all kinds of children and adults; we have four beaches, two lakes, ten miles of walking trails, and a brand-new park in downtown; we have great educational opportunities. We’ve been ranked in the safest cities in Georgia since 2012. And an important component of our quality of life is our charming, friendly, loving, inclusive community. I think that’ll continue to be a big magnet that draws people here.

What do you love about this community?
Yesterday we had our annual state of the city, and we come together to talk about the successes we had last year, and we look at the successes we plan to have this year. But really, it’s a celebration of the extraordinary people who live in this community. From Kim Watt who won state recognition last year for our award-winning parks program, to folks that are volunteering high school students adopting seniors — that’s really what’s going on here. It is a truly loving, giving community. People have a sense of community, of feeling loved and cared for, and they want to give that back.

How would you describe a perfect day here?
Already had it! Today I’ve been to one of the high schools and talked to the ROTC cadets. I just had a young girl from North Cobb High School in here who’s been chosen to be in a team contest because of her grades. Just having the opportunity to be out in the public, to celebrate people’s successes, and spend time with this next generation being educated now. There’s so much promise there.

If you could invite anyone to spend a day in Acworth, who would it be?
I’d bring the President of the United States, whoever holds that office at that point in time, because I’d want them to see how local government builds unity and consensus and has worked so hard to build that confidence and trust in the people here. We have a high trust level, a high confidence level, and that’s not just because of the mayor or city council, it’s everybody. I would want to bring the President here and show him or her exactly how you lead, how you build trust, how you unify, how you bring people together.

Tell me one of your proudest moments as mayor.
In 2010 we applied for the All-America City Award. When you apply, you must describe three programs you have that change people’s lives. We had our special needs program, which brought special needs children together with high schoolers who adopted the kids. Then we have our Acworth Achievers, an after-school mentoring program. Then we have the Expanding Horizon program, where kids were chosen to go to special places that they never would’ve been able to go. So, they invited us to Kansas City to make a presentation. We took kids from each one of those programs, and we let them make the presentation. They had signs that said, for instance, if you were a kid with special needs, “I used to go and watch my brother play baseball, now he comes and watches me.” Or, “Nobody in my family has gone past the 12th grade. I just got accepted to University of Georgia.” We had ten minutes on a stage in front of 5,000 people. And out of 25 cities, we were chosen. That was an extraordinary moment. It really tells the story of who we are today, even though that was several years ago. The judge on the stand said, “You are a city with a heart.” I’ll never forget that. And that heart’s only gotten bigger.